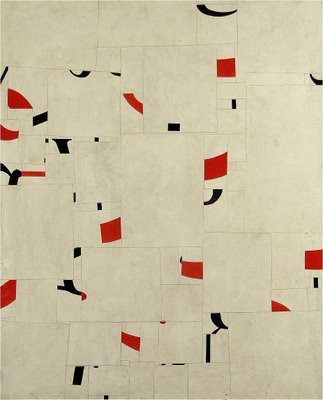 Neo-Plasticism of often thought of as a very austere style of geomentric painting with some very rigid rules and traditions. Coloration is supposed, according to Piet Mondrian, to only include black, white and the primary colors of red yellow and blue in an effort to suppress expressionistic work. This work of mine adheres to many limitations of neo-Plasticism yet is constructed in a rather casual and free way without the use of measuring. rectangles of paper with red and black lettering were cut rather haphazardly with scissors and then fitted together in reference to the way rocks are fitted together in walls in central where I lived for seven years.

Posted by Cecil Touchon at 6:42 AM

I see your work en fffound, and after i have seen your web site. Yours collages are very nice.
I don't understand yours words but i can undestand yours images...