Covering 10 years (2010-2019) of the Iberian Variations collages, this new 262 page hardcover book,  focuses on this series of abstract expressionist works within Touchon's oeuvre. 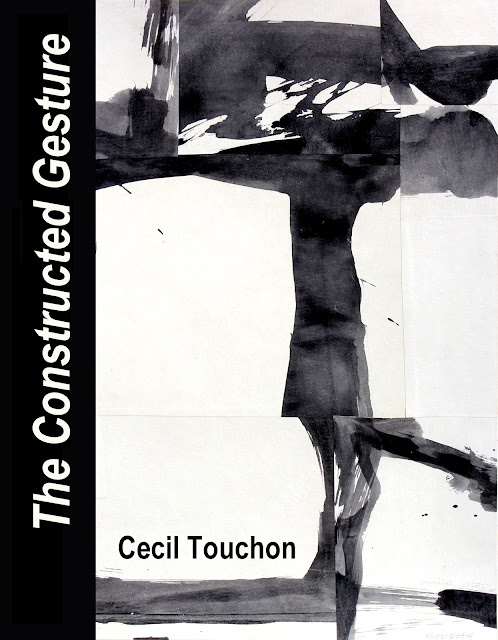 The Iberian Variations suite started in 1987. The original thought was to create a series of gestural, Abstract Expressionist collages. This idea eventually developed into the ‘constructed gesture’. This was based on make the material very freely and without concern for an ‘image’ and then construct the composition by cutting up the source material that I had prepared and arrange into a gesture through the process of collage. This strategy allowed me to work in a careful and controlled way in order to look for a composition that interested me. 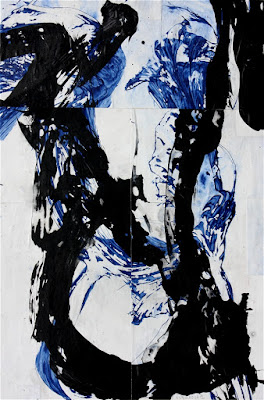 This collage technique also allows for the visual connections and disjunctions common to collage construction. The ability to take unrelated snippets of the same material and reorganize it allows for a much greater level of constructive possibilities than a singular gesture accomplished in a few seconds as is typical with gestural art making. Another advantage is to be able to find and edit especially interesting gestural marks and then organize the composition in such a way that the work can seem to run off the edges of the composition instead of the typical centralized composition where the gestures have to remain contained within the confines of the surface being worked on.

This process permits the kind of time needed to contemplate the possibilities in a similar way that distinguishes how one speaks spontaneously in conversation compared to how one might write out the ideas where more time is allowed to think out the thing that one desires to express and to then express it in a more precise way. The urgency of the time element in conversation is eliminated when one is writing and thus the possibilities of communication is greatly expanded. This is the basic theory of the constructed gesture.

During the course of this series of works I employed a wide range of techniques in the creation of the papers used for these collages. The typical paper used is a collection of unused billboard sheets that are approximately 60 x 60 inches in size. Being paper for printed billboards, the paper is very durable and made for existing out in the weather and sunlight and for being pasted to billboard panels. For my use this creates a very interesting, resilient surface to work on with thinned down acrylic paints. The size of the sheets allows for working with the paint in a very fluid and unrestricted way.

I lay these massive sheets out on the ground when the weather was just right and then with a bucket of paint and a large brush I dance around the sheet and work from all directions. At times I would allow the sheet to mostly dry and then spray the sheet with water to wash away whatever remaining spots on the sheet that were still wet. This technique can be clearly seen on Fusion Series #s 2984 – 2987 where a great deal of the paint was washed off. 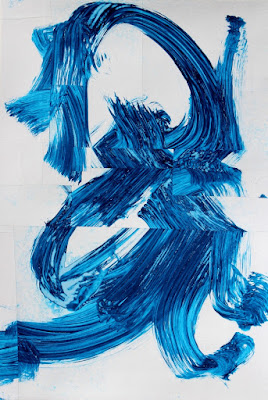 Another technique was to stain certain sheets with a coffee color to give more warmth to the negative spaces. At a certain point I began experimenting with blue paint and a combination of blue and black using all the same techniques mentioned previously. Then sometime later I tried some other kind of markings such as: no.s 3842 -3844 to see what that might look like.

Compositionally, I experimented with creating dense, compact compositions and at other times more open or even very minimal compositions having the black markings occupying only a small part of the compositional space as in: no.s 2988 & 2994.

In a collage, every square inch must be considered as in a film where there is a reason for every scene, and each scene is cut at exactly the right point to create a harmonious whole. In collages such as these, editing is equally an important and critical element of the work that gives the opportunity for a greater level of control that other forms of gestural or expressionistic ways of working have difficulty in accomplishing.

All of these collages are mounted on larger sheets of watercolor paper. They are normally numbered in the actual work in pencil on the front and signed on the back of the watercolor sheet.

The numbering system used for these works locates them within the larger body of the Fusion Series. This accounts for the gaps in the sequence. Looking at the Fusion series as a whole one will see that at different times I switch back and forth between the types of collages I am creating because each group of works requires a different set of papers. I will work for so long on a certain idea, maybe days or weeks, and then put everything away and get out the other sets of materials for a different type of collage.
Posted by Cecil Touchon at 4:30 PM