The Collage Art of Hope Kroll 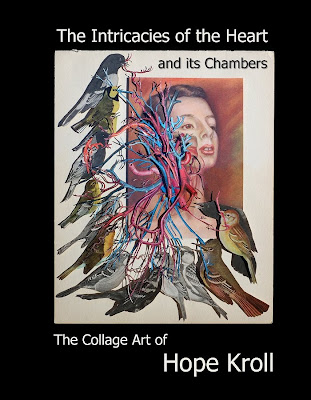 The Intricacies of the Heart and Its Chambers

Introduction from the Catalog by Cecil Touchon

The genesis of this exhibition centers around Hope Kroll’s contribution to the Museum’s Fluxcase Micro Museum project which is a series of very small cases (8x10x2 inches) that each contain 50 tiny boxes commemorating the 50 year anniversary of Fluxus. Hope had contributed a number of boxes for one of these cases and I suggested that perhaps she would like to fill an entire case and in exchange I would arrange an exhibition. Once the case was finished we decided to round out the exhibition with a number of Kroll’s collages. These additional works sent especially for this exhibit from the artist’s studio will be on view along with Kroll’s works in the permanent collection.

When contemplating the work of Hope Kroll a saying comes to mind by the early 20th Century Indian classical musician and Sufi mystic Hazrat Inayat Khan; The mind is the surface of the heart, and the heart is the depth of the mind. Kroll’s work explores the nature of the heart and mind in a way that is playful and yet insightful calling up tenderness as well as terror and equal parts of rapture and repulsion.

Kroll’s work tirelessly seeks out the honey of wisdom through the masterful arrangement of images from old encyclopedias, medical texts, children’s books, popular science, technical manuals, paper dolls and antique photographs. Her use of a 3-D technique gives her paper constructions a surprising presence. A fusion of poetic Surrealism and scientific paraphernalia , many of Kroll’s miniature works have intricately cut out illustrations all the way down to the individual hairs and blood vessels. The shear amount of time and attention Kroll spends in her elaborate cuttings and assemblings is worthy of attention in and of itself. She could well be called a paper surgeon; a title Kroll would no doubt embrace considering her obvious love for medical apparatuses and scientific illustrations. Kroll’s use of original antique materials lends a palpable richness and feeling of historical continuity to her work that suggests an exploration of the collective unconscious of humanity as found in the depths of her own being. As Kroll states: “Each piece becomes its own frozen drama or illustration for a story meant to reflect a visual manifestation of psychological, emotional or spiritual states.”

One of the great charms of Kroll’s work is her uninhibited embrace of the childhood feelings and memories that shaped her artistic life. Her extreme attention to detail recalls Marcel Proust’s À LA RECHERCHE DU TEMPS PERDU (Remembrance of Things Past) only instead of weaving delicate, complex sentences Kroll achieves a similar Proustian effect with her minute and intricate cuttings that are all the more elaborate by constructing the images so that they float in space and cast shadows. Her sensibility also reflects a romantic sense of nostalgia typified by the constructed box assemblages of Joseph Cornell.

Kroll’s collages at once serve a complex web of purposes that gives her work a satisfying depth and openness.

As a visual diary the collages appear to call up or commemorate personal experiences and record insights. Kroll’s method is revelatory rather than expository in nature. The purpose of her unbound diary would seem to be an attempt to reveal what is hidden rather than to explain what is obvious. For this reason the process of creating collages is designed to be a theatrical surrogate of the world that is ambiguous and open to the viewer’s own interpretations. These multiple interpretations that can be inferred in any of the works affords Kroll the opportunity to hide her own personally meaningful messages in plain view. This allows the works to be shared publicly while remaining enshrouded in a multiplicity of potential meanings in much the same way that a dozen witnesses can experience the same event and each sees something unique to himself and his point of view.

As cultural commentary Kroll’s careful juxtapositions explore the poetic content of popular culture including cartoon characters (Goofy in Nirvana), odd ball medical inventions that were the technological cutting edge of their day and the ever shifting demands of feminine identity often set against a primordial backdrop of nature or at the other end, enmeshed in gadgetry suggesting a continual preoccupation with intervention and alteration. This calls to mind the childhood rhymes;

What are little boys made of?
Snippets and snails,
And puppy dog tails,
That's what little boys are made of.

Accompanying images to these rhymes often show boys playing with bugs in the mud while the girls are clean and dainty and perhaps serving tea to their dolls. Surveying Kroll’s iconography we would have to conclude that girls are as much made of snippets and snails as sugar and spice. More poignantly, one could conclude that the seemingly innocuous lines of these rhymes have yielded a more sinister result of infecting the minds and imaginations of innocent children with social limitations and expectations that in adulthood grow unchecked into all manner emotional anxiety and the proliferation of both psychological and physical prosthetic devises in an attempt to correct perceived abnormalities or replace things that seem to be lost or missing.

As an encyclopedic exploration of visual language, one discovers a rich and subtle range of meanings in Kroll’s work. As an example, let us take the recurring images of birds. Kroll admits that the images of birds in her work represent ‘spiritual messengers’ and while this appears to be true, these beings in Kroll’s work often serve other purposes. Perhaps all bird images represent the spiritual dimension in Kroll’s work but a close reading will reveal that the birds lend a wide range of meaning to Kroll’s compositions. At times they are helpers as in the work (Feeding Elijah), at other times they are witnesses to a tragedy (Absent but Dear) , occasionally they seem to be serving a more malevolent or threatening purpose as in the works; (Scavengers) or (Infestation). In Kroll’s hands birds are creatures to be feared as much as admired and loved.

Still, the imaginal world presented by Kroll, while containing, on occasion, subjects and images that seem menacing or disturbing such as the work (Swarm) there remains an ambient feeling that the world is founded on harmony and order so long as one accepts that the world and its inhabitants are often strange, peculiar and abundant in abnormalities. Looking for evidence of the creator’s nature behind the scenes of Kroll’s world one always feels a sensitive hand, a discerning eye, a disciplined mind and an all pervading kind heartedness.

Kroll, like many collage artists in general is an avid collector who finds beauty, interest and resonance in things found or discovered. The love of found materials and their anthropologically interesting content incline collage artists to be masters of editing and arranging things. The art of the collage artist is often in composing and orchestrating collections of otherwise unrelated materials into a meaningful and cohesive composition. The best of such work has an internal integrity that gives the impression that the work fell out of the sky whole. This feeling of internal integrity seems always present in Kroll’s work.

The works by Hope Kroll in the permanent collection of the International Museum of Collage, Assemblage and Construction shall long be cherished as some of the finest examples in the genre of collage art. See her website at: http://hopekroll.com

The International Museum of Collage, Assemblage and Construction

Posted by Cecil Touchon at 6:17 PM

this was all said just so beautifully. I love her work and would love to buy her book. She needs more exposure!